The approach taken by the Bank of England (BoE) towards decarbonising its monetary policy lacks ambition, according to this paper from a group of academics led by the New Economics Foundation.

The study examines the BoE’s plans to apply a green tilt to its corporate bond purchase scheme, and finds it is likely to result in only a negligible reduction in the average emissions intensity of the portfolio. It says the BoE risks missing its own target of a 25% reduction by 2025.

The paper describes the current plans as a missed opportunity, and a failure to live up to the BoE’s new environmental mandate given to the bank by chancellor Rishi Sunak in 2021. The paper offers a series of proposals it says would help the BoE “genuinely lead by example” on decarbonising monetary policy.

These include beginning to exclude fossil fuel companies and applying a stronger tilt to its portfolio. The authors say combining both options would reduce the carbon intensity of the corporate bond purchase scheme by 39%, allowing the bank to achieve its 2025 target right now instead of waiting three more years. 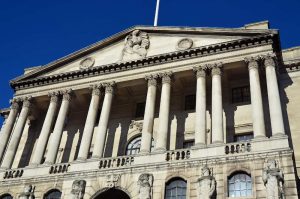 The Bank of England in London (c) George Rex

Civil society groups have criticised the ECB’s plan to decarbonise its corporate portfolio, saying it lacks transparency and allows continuing support for the worst polluters.

The City of London, one of the world’s leading finance centres, faces ambitious national climate targets. Here are five key UK government and regulatory initiatives aimed at greening the City.

Leading civil society groups have called for the UK’s financial regulators to be given a statutory objective to help meet the country’s climate commitments.